What is Cross-Linked Polyethylene Cable (XLPE)? 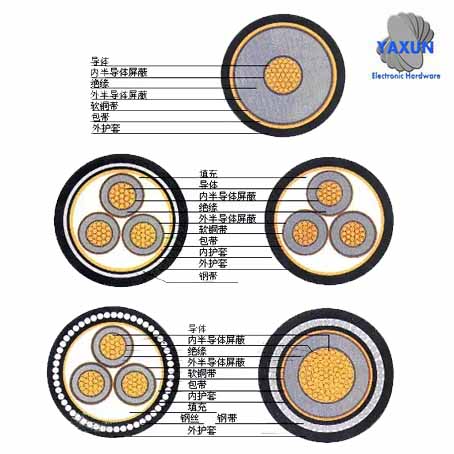 XLPE cable is a kind of cross-linked polyethylene cable, which occupies an extremely important position in the power supply grid. XLPE cable is a kind of cable suitable for power distribution network and other fields, and has the advantages that PVC insulated cables can't compare. It has simple structure, light weight, good heat resistance, strong load capacity, non-melting, chemical corrosion resistance, and high mechanical strength.
Enough attention should be paid to the safety and reliability of XLPE power cable line operation. Necessary and appropriate measures must be taken to prevent accidents and monitor the operating conditions of power cable lines. The test plan of XLPE cable mainly includes withstand voltage test, routine state assessment and partial discharge test. The main part that can be used for cable testing in field operation is partial discharge testing.

Cross-linked cables usually refer to the use of cross-linked materials in the insulation layer of the cable. The most commonly used material is cross-linked polyethylene (XLPE).
The cross-linked polyethylene insulated cable uses chemical or physical methods to transform the polyethylene molecule of the cable insulation from a linear molecular structure to a main network molecular structure. That is, thermoplastic polyethylene is transformed into thermosetting cross-linked polyethylene. Thereby greatly improving its heat resistance and mechanical properties, reducing its shrinkage, making it no longer melted after being heated, and maintaining excellent electrical properties.
The long-term allowable working temperature of XLPE cables is increased from 70°C to 90°C (or higher). The allowable temperature is increased from 140°C to 250°C (or higher) during short-circuit, which greatly improves the actual use performance while maintaining its original excellent electrical performance.

The safe operation of the XLPE cable is very important to the stability of the entire power system. Once a failure occurs, it will cause a major power outage in the area under its jurisdiction. Based on the analysis of materials such as the records of power cable repairs in major cities throughout the year, photos of the accident site, and sealing samples of faulty cables. The causes of power cable operation failures can be divided into four types: External force damage, cable accessory manufacturing quality, cable laying and installation quality, and cable body manufacturing quality accounted for 58%, 27%, 12%, and 3% respectively. Excluding faults caused by external force damage, cable accessory faults account for more than 50% of cable operating faults. However, more than 97% of the cable accessory failures are insulation failures caused by the surface discharge of the solid composite medium. It can be seen that the operation of XLPE power cable lines, especially the safety and reliability of the operation of cable accessories, should be given sufficient attention. Necessary and appropriate measures must be taken to prevent accidents and monitor the operating conditions of power cable lines.

Cross-linked polyethylene insulated cables use peroxide cross-linking methods to change polyethylene molecules from linear molecular structures to three-dimensional network structures, and from thermoplastic materials to thermosetting materials. The working temperature is increased from 70°C to 90°C, which significantly improves the current-carrying capacity of the cable. XLPE insulated cables have the following advantages:
1. Heat resistance: The XLPE with a net-like three-dimensional structure has excellent heat resistance. It will not decompose and carbonize below 300℃, the long-term working temperature can reach 90℃, and the thermal life can reach 40 years.
2. Insulation performance: XLPE maintains the original good insulation properties of PE, and the insulation resistance is further increased. The dielectric loss tangent value is very small, and it is not greatly affected by temperature.
3. Mechanical characteristics: Due to the establishment of new chemical bonds between macromolecules, the hardness, stiffness, wear resistance and impact resistance of XLPE have been improved, thus making up for the shortcomings of PE being vulnerable to environmental stress and cracking.
4. Chemical resistance: XLPE has strong acid and alkali resistance and oil resistance. Its combustion products are mainly water and carbon dioxide, which are less harmful to the environment and meet the requirements of modern fire safety. 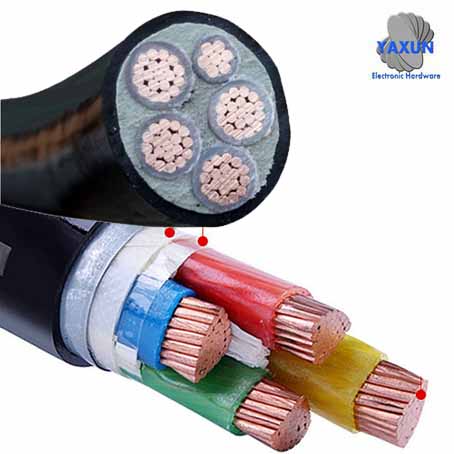 Cross-linked polyethylene insulated cables are suitable for power distribution networks, industrial installations or other fields that require large-capacity electricity. It is used for fixed laying on power transmission and distribution lines with AC 50Hz and rated voltage 6kV～35kV. The main function is to transmit electric energy.

Although cross-linked polyethylene (XLPE) has many outstanding advantages as an insulating material, and some excellent products have been developed after years of hard work, there are still some important problems that need to be solved. From the perspective of the HVDC power transmission cable market, traditional HVDC power transmission cables such as impregnated paper-insulated cables or oil-filled cables are still mainstream products, and improvements are still being made on this basis. It can be seen from the products produced by the two largest cable companies, Presman in Italy and Nexans in France. In terms of the products of 500kV and above HVDC transmission cables, oil-filled-paper insulated cables are still the absolute mainstream products. In contrast, 500kV HVDC XLPE insulated cables are only in the test certification stage in Japan without commercial certification. Although ABB’s light-duty high-voltage DC transmission cables have passed commercial certification for 80kV, 150kV and 320kV, they are only applied to engineering projects with two voltage levels of 80kV and 150kV. From this, it can be seen that increasing the voltage level and capacity is the development direction of high-voltage DC XLPE insulated cable products, which also puts forward corresponding technical requirements.

Of course, it also includes some other issues: The mechanism of insulation material aging, the long-term stability of new materials, and the influence of partial discharge. It is not clear whether the upper limit of the operating voltage should be determined by the measurement of space charge or by the threshold voltage of electrical aging.

Identify the false breakdown method of XLPE cable:
In the process of using the series resonance test system to perform partial discharge and high voltage tests of the finished medium voltage cable products, sometimes false breakdowns suddenly appear during the test due to various reasons: How to correctly identify the true breakdown of the cable itself or the false breakdown of the cable due to other reasons is of great significance for improving the efficiency of the cable factory test.
The factory partial discharge and high voltage tests of medium voltage XLPE power cables are carried out one by one in the shielded room. At this time, you can consider replacing the insulated core for retesting. If the voltage test passes normally after the core is replaced, it should be determined that the cable has really broken down. Or, re-boost, if the breakdown voltage shows a gradual decrease, it can also be determined that the cable has a true breakdown. If the breakdown voltage of the cable is at the same value every time, it should be considered whether the cable end has a breakdown. At this time, the door interlock switch of the door of the partial discharge shielding room can be manually closed, and the door of the shielding room can be opened to increase the voltage, observe the breakdown phenomenon, and quickly determine the end breakdown position. If after investigation, there is no breakdown at the end of the cable, replace multiple insulated cores and cables, and even retest the cables that have been qualified by Zengjin or no-load retests. The breakdown voltage always maintains the same value. It should be possible to confirm that a false breakdown occurred in the cable, and the equipment should be inspected; the test should be performed after troubleshooting. However, for some long-length single-core medium-voltage cross-linked cables that have been inspected, it should be checked whether they have exceeded the allowable load of the test equipment. In this case, detuning and tripping will also occur during the test process, and it is not necessary to rashly determine that the cable has broken down.

There is a special case that needs to be explained here. Sometimes a short circuit occurs inside the cable insulation, and the series resonance test system may not be able to resonate to boost the voltage. This is also a special cable breakdown phenomenon. In case of this phenomenon, it can be confirmed after the test by replacing the well-insulated wire core. 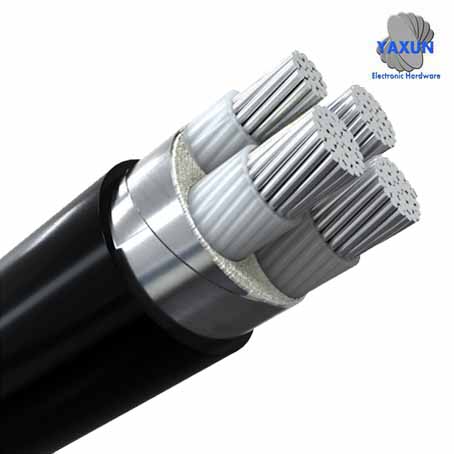 Inert gas
It adopts polyethylene insulating material added with peroxy compound cross-linking agent, which is completed by three-layer co-extrusion: the extrusion of the shielding layer of the conductor-the insulating layer-the insulating shielding layer. Continuously and uniformly complete the cross-linking process through a sealed cross-linking tube filled with high temperature and high pressure nitrogen. The heat transfer medium is nitrogen (inert gas), the cross-linked polyethylene has excellent electrical properties, and the production range can reach 500KV.

advantage:
1. Save money:
Reduce costs. It can be used directly by the cable manufacturer, which is 1500~3000 yuan/ton cheaper than the chemical and radiation cross-linked polyethylene cable special particles purchased in the market.

2. Time saving;
The time period of about one week for inquiring, ordering, production, and transportation is needed for the cable manufacturer to purchase chemical and irradiated cross-linked polyethylene cable special material particles. When using DH-125 functional mother particles, after deciding on the production plan, the cable can be directly produced after 5 minutes of preparation.

The modified polyethylene insulating material is used through 1+2 extrusion method: the extrusion of the foreign body shielding layer-the insulating layer-the insulating shielding layer. Pass the cooled insulated wire core uniformly through the radiation scanning window of the high-energy electron accelerator to complete the cross-linking process. No cross-linking agent is added to the radiation cross-linked cable material. During cross-linking, the high-energy electron beam generated by the high-energy electron accelerator effectively penetrates the insulating layer, and the cross-linking reaction is generated through energy conversion. Because electrons have high energy and pass through the insulating layer uniformly, the cross-linked bonds formed have high binding energy and good stability. The physical performance shown is that the heat resistance is better than that of chemically cross-linked cables. However, due to the limitation of the energy level of the accelerator (generally no more than 3.0Mev, the effective penetration thickness of the electron beam is less than 10mm). Considering geometric factors, the voltage level of the production cable can only reach 10KV, and the advantage is below 6KV.

Overhead insulated cable
When overhead insulated cables are laid in the open air, the environmental resistance and radiation resistance of the insulating materials are more important. Irradiation cross-linked insulating materials have to undergo irradiation processing, and they themselves have good radiation resistance. The radiation dose applied in the cross-linking production process leaves a large safety margin from the destruction dose. The radiation damage dose of polyethylene is 1000KGY, and the processing dose is about 200KGY. Coupled with the improvement of the special formula, it is still cross-linked by radiation in a relatively wide range, so its performance will be improved when exposed to radiation during a longer period of use.
Share:
PREV：Classification and Price of Flame Retardant Cables
NEXT：Structure and Performance of Electric Heating Cable