Product Item: China Manufacturer of Shielded Cables
Category: Wire and Cable
Classification and application of shielded wire: single core, 2 core, 3 core, 4 core, twisted pair, splice.
There are many shielding methods, which are mainly used in the circuit system of weak current control after reliable grounding to ensure the relief of signal interference.
To give a few examples:
1. The transmission line for security monitoring is a shielded coaxial cable (SWYV): There is a metal mesh structure in the outer skin of the transmission medium to ensure the clarity and stability of the closed-circuit signal
2. Shielded twisted pair (STP) in the network cable: It has an extra layer of shielding than unshielded twisted pair, and it is mainly used in systems with higher signal requirements. Each terminal of the entire system is shielded and protected to reduce weak electromagnetic interference and reduce transmission loss.
3. Bus for building intelligent control, such as HVAC control bus: Generally used in indoor, underground and public places, it is also used to reduce electromagnetic interference.
4. Inductive lightning protection shielded wire in lightning protection system.
5. Shielded wire net of switch cabinet busbar: Reduce the electromagnetic influence of large components on small components.

What is a shielded cable? What is its function and application?

A shielded cable is a transmission line that uses a metal mesh (copper, aluminum, platinum) braid to wrap the signal line. The braid is generally red copper or tinned copper. The shielding layer of the shielded wire needs to be grounded, and external interference signals can be led into the ground by this layer.
Shielded wire is a wire with a metal braid shell specially used to reduce the influence of external electromagnetic fields on power or communication lines. This shielded wire also has the effect of preventing electromagnetic energy from radiating outward from the wire. 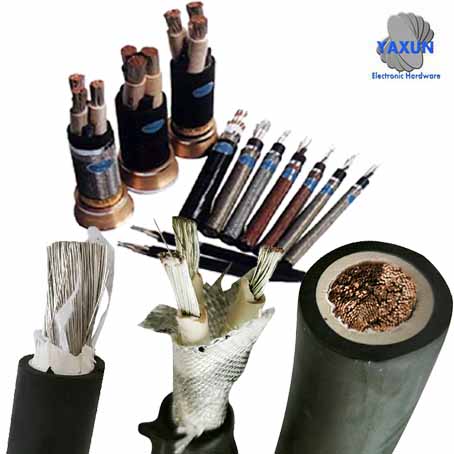 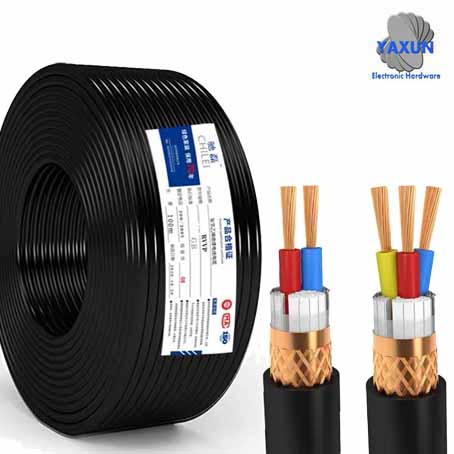 The shielding layer of the shielded wire is not allowed to be grounded at multiple points, because different grounding points are different, and there will be a potential difference at each point. If multiple points are grounded, a current is formed in the shielding layer, a current is induced on the wire, and interference is induced on the signal line, which not only fails to shield, but introduces interference. Especially in the occasions with many frequency converter equipment, the interference contains various high-order harmonics, which will cause greater impact, so special attention should be paid.

Electromagnetic compatibility (EMC) refers to the ability of electronic equipment or network systems to resist electromagnetic interference, while not generating excessive electromagnetic radiation. In other words, the equipment or network system is required to be able to work normally in a relatively harsh electromagnetic environment, while not radiating excessive electromagnetic waves to interfere with the normal operation of other surrounding equipment and networks.
The balance characteristics of U/UTP (unshielded) cables do not only depend on the quality of the components themselves (such as twisted pairs), but will be affected by the surrounding environment. Because the metal around U/UTP (unshielded), hidden "ground", pulling and bending during construction, etc. will destroy its balance characteristics, thereby reducing EMC performance.
Therefore, there is only one solution to obtain lasting and unchanging balance characteristics: Add an extra layer of aluminum foil to all core wires for grounding. The aluminum foil adds protection to the fragile twisted-pair core wire, and at the same time creates an artificially balanced environment for U/UTP (unshielded) cables. So as to form what we now call shielded cables. 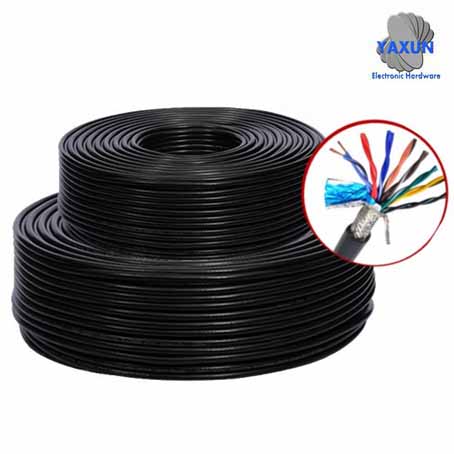 The shielding principle of shielded cable is different from the principle of balanced cancellation of twisted pair: shielded cable is an extra layer or two layers of aluminum foil on the outside of four pairs of twisted pairs. Using the principle of metal reflection, absorption and skin effect of electromagnetic waves: (The so-called skin effect means that the distribution of current in the conductor section tends to be distributed on the surface of the conductor as the frequency increases. The higher the frequency, the smaller the skin depth, that is, the higher the frequency, the weaker the electromagnetic wave penetration ability). Effectively prevent external electromagnetic interference from entering the cable, and at the same time prevent internal signals from radiating out and interfering with the work of other equipment.

Experiments show that electromagnetic waves with a frequency exceeding 5MHz can only pass through a 38μm thick aluminum foil. If the thickness of the shielding layer exceeds 38μm, the frequency of electromagnetic interference that can enter the cable through the shielding layer is mainly below 5MHz. For the low frequency interference below 5MHz, the balance principle of twisted pair can be used to effectively cancel it.

The single-layer thickness of the aluminum foil shielding layer in IBMACS shielded cables reaches 50-62μm, which provides a more complete shielding effect. At the same time, because only a single-layer shielding is used, it will be simpler for construction, easy to install, not easy to cause man-made damage during the construction process, and the thickness of the aluminum foil can withstand greater destructive force. So as to provide users with higher quality transmission performance.

One end of the shielded cable is grounded, and the other end is suspended
When the transmission distance of the signal line is relatively long, the two grounding points may have different potentials due to the different grounding resistances at both ends or the current on the PEN line. At this time, if the two ends are grounded, the shielding layer will have current flow, which will interfere with the signal. Therefore, in this case, one point is generally grounded and the other end is suspended to avoid the formation of such interference.
Grounding at both ends of the shielding effect is better, but the signal distortion will increase.
Please note: The two shielding layers should be mutually insulated and isolated shielding! If they are not insulated from each other, they should still be regarded as single-layer shielding!
The grounding of the two ends of the outermost shielding layer induces current due to the introduced potential difference, thus generating magnetic flux that reduces the intensity of the source magnetic field, thereby basically canceling out the voltage induced when there is no outer shielding layer; The innermost shield is grounded at one end, and because there is no potential difference, it is only used for general anti-static induction. The following specifications are the best proof!

"GB50217-1994 Power Engineering Cable Design Code"—— 3.6.8 The grounding method of the metal shield of the control cable shall meet the following requirements:
(1) The analog signal loop control cable shielding layer of the computer monitoring system shall not form two or more points of grounding, and a centralized one-point grounding should be used.
(2) Except for (1), the shielding layer of the control cable except for a point of grounding. When the electromagnetic induction interference is large, two points of grounding should be adopted; The interference of electrostatic induction is relatively large, and it can be grounded at one point.
For double shielding or composite total shielding, one point should be used for the inner and outer shields, and the two points should be grounded.
(3) In the choice of two-point grounding, it is necessary to consider that the shielding layer will not be melted under the action of transient current.
"GB50057-2000 Building Lightning Protection Design Code"-Article 6.3.1 stipulates: When a shielded cable is used, its shielding layer should be equipotentially connected at least at both ends. When the system requires equipotential connection only at one end, two-layer shielding should be used, and the outer shielding should be handled as described above. 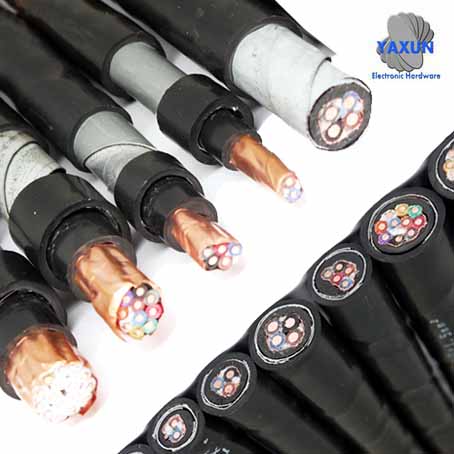 The principle is:
1. One end of the single-layer shield is grounded, and no potential difference is formed. It is generally used for anti-static induction.
2. Double-layer shield, the outermost shield is grounded at both ends, and the inner shield is equipotentially grounded at one end. At this time, the outer shield induces current due to the potential difference, and therefore generates magnetic flux that reduces the intensity of the source magnetic field, thereby substantially canceling out the voltage induced without the outer shield.
If it is to prevent electrostatic interference, it must be grounded at a single point, whether it is a one-layer or two-layer shield. Because the electrostatic discharge speed of single-point grounding is the fastest.
However, the following two cases are excluded:
1. There is strong current interference from the outside, and single-point grounding cannot meet the fastest discharge of static electricity.
If the grounding wire has a large cross-sectional area to ensure the fastest discharge of static electricity, it must also be grounded at a single point. Of course, it is true, there is no need to choose two layers of shielding, otherwise, two layers of shielded cables are necessary. The outer shield is mainly to reduce the intensity of interference, not to eliminate interference. At this time, it must be grounded at multiple points. Although it cannot be finished, it must be weakened as soon as possible. To weaken, multi-point grounding is the best choice.

For example, the cable tray in the enterprise is actually the outer shielding layer. It must be grounded at multiple points, the first line of defense, to reduce the intensity of the interference source.
The inner shielding layer (in fact, you don't buy double-layer cables, generally the outer layer is the cable tray, and the inner layer is the shielding layer of the shielded cable) must be grounded at a single point. Because the external intensity has been reduced, discharge as soon as possible to eliminate interference is the purpose of the inner layer.

2. Safety requirements such as external electric shock and lightning protection.
In this case, lightning protection requires two layers of protection. The outer layer is not used to eliminate interference, but for safety reasons. To ensure the safety of people and equipment, it must be grounded at multiple points. The inner layer is to prevent interference, so it must be grounded at a single point.

Use characteristics of shielded cable

1. The finished cable should withstand the power frequency AC voltage experiment. The power core is 11.0kv5min
2. Transition resistance: The transition resistance of the shielding layer or monitoring layer should not be greater than 3kΩ.
3. Burning test: The cable should withstand the combustion test specified in GB12666.2 DZ---1
4. Partial discharge experiment: 1.5U0 discharge capacity is not more than 20PC
5. Dielectric loss tangent test: when U0 is not greater than 0.035.
6. Impulse voltage test:   95°C, 60KV positive and negative polarity 10 times each, apply power frequency 11KV voltage to the cable pattern for 15min
7. The cable should be able to withstand 3U, 4h power frequency voltage test
Share:
PREV：Manufacturing of Glass Fiber High Temperature Wire and Cable
NEXT：Twisted Pair Manufacturing