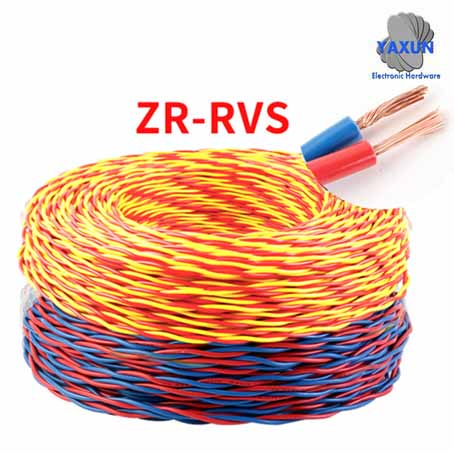 Twisted pair (TP) is the most commonly used transmission medium in integrated wiring projects. It is composed of two copper wires with an insulating protective layer. The two insulated copper wires are twisted together at a certain density, and the radio waves radiated by each wire during transmission will be offset by the radio waves emitted by the other wire, effectively reducing signal interference.
Twisted-pair wire is generally formed by two 22-26 gauge insulated copper wires twisted with each other, and the name "twisted pair" is also derived from this. In actual use, the twisted-pair wire is wrapped in an insulated cable sleeve by multiple pairs of twisted-pair wires. If one or more pairs of twisted pairs are placed in an insulating sleeve, it becomes a multi-pair cable, but in daily life, the "twisted pair cable" is generally directly called "twisted pair".
Compared with other transmission media, twisted pair cables are subject to certain restrictions in terms of transmission distance, channel width and data transmission speed, but the price is relatively low. 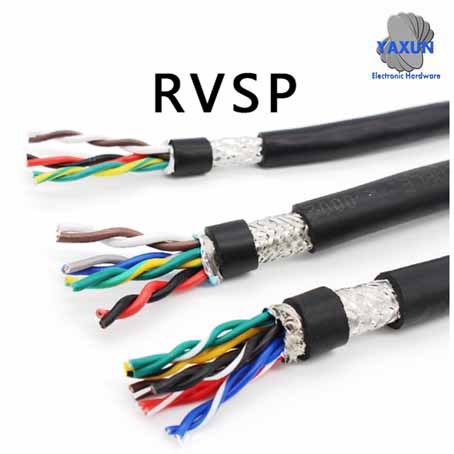 Unshielded twisted pair (abbreviated as UTP) is a data transmission line composed of four pairs of transmission lines of different colors, which are widely used in Ethernet circuits and telephone lines. Unshielded twisted pair cable has the following advantages:
1. No shielding jacket, small diameter, saving space occupied, and low cost;
2. Light weight, easy to bend and easy to install;
3. Minimize or eliminate crosstalk;
4. It is flame retardant;
5. With independence and flexibility, it is suitable for structured integrated wiring. Therefore, in the integrated wiring system, unshielded twisted pair is widely used.

Classification according to frequency and signal-to-noise ratio

In North America, the three most influential international cabling organizations are as follows. ANSI (American National Standards Institute) TIA (Telecommunication Industry Association) EIA (Electronic Industries Alliance). Since the two organizations TIA and ISO often coordinate in the development of standards, the difference between the standards promulgated by TIA and ISO is not very large. In North America, and even the world, the most widely used twisted pair standards are ANSI/EIA/TIA-568A and ANSI/EIA/TIA-568B (actually ANSI/EIA/TIA-568B.1, referred to as T568B). The main difference between these two standards is the difference in core wire sequence:
The line sequence definition of EIA/TIA 568A is green and white, green, orange and white, blue, blue and white, orange, brown and white, and brown. The label is shown in the following table:


The line sequence definitions of EIA/TIA 568A are: green and white, green, orange and white, blue, blue and white, orange, brown and white, and brown. The labels are shown in the following table:

The line sequence definition of EIA/TIA 568B is as follows: orange white, orange, green white, blue, blue white, green, brown white, brown, and its labels are shown in the following table:
According to the 568A and 568B standards, the functions of each contact of the RJ-45 connector (commonly known as the crystal connector) in the network connection are: 1, 2 is used for sending, 3, 6 are used for receiving, 4, 5, 7, 8 are bidirectional lines; For the twisted pair connected to it, in order to reduce mutual interference, the standard requires that 1 and 2 must be a pair of twisted wires. 3 and 6 must also be a pair of twisted wires, 4 and 5 are entangled with each other, and 7 and 8 are entangled with each other. It can be seen that there is no essential difference between the two standards 568A and 568B, but the arrangement of the 8 twisted pairs is different when connecting to RJ-45. The 568B standard is often used in actual network engineering construction.

Step 2: Hold the crimping pliers slightly and rotate it slowly (no need to worry about damaging the skin of the core wire inside the network cable, because there is a certain distance between the two stripping blades, which is usually the diameter of the 4 pairs of core wires inside). Let the knife cut the protective rubber of the twisted pair and pull off the rubber. Of course, you can also use a special wire stripping tool to peel off the protective rubber. Note: The stripping length should usually be exactly the length of the crystal head, which can effectively avoid the trouble caused by too long or too short stripping. Too long stripping is unsightly. On the other hand, because the network cable cannot be jammed by the crystal head, it is easy to loosen; The stripped wire is too short, because of the presence of the outer skin, it is too thick to be inserted into the bottom of the crystal head completely, causing the plug pins of the crystal head to not be in good contact with the core wire of the network cable.

Step 4: Untie each pair of cables that are entangled with each other one by one. After untying, arrange and straighten out several sets of cables in sequence according to the rules. When arranging, care should be taken to avoid excessive winding and overlap of the lines. After arranging and straightening the cables in order, the cables will be bent to a certain extent because they were entangled with each other before. The cables should be pulled as straight as possible and kept flat. The method of pulling the cable straight is also very simple: grasp the cable with both hands and then apply force in two opposite directions and pull it up and down.

Step 5: After arranging the cables in sequence and straightening and pressing them, you should check them carefully, and then use the cutting edge of the crimping pliers to cut the cable tops neatly.

Step 6: Insert the organized cable into the crystal head. It should be noted that the side of the crystal head with the molded spring leaf should be downward and the side with the pins should be upward, so that the end with the pins points away from you, and the end with the square hole faces you. At this time, the leftmost foot is the 1st foot, the rightmost foot is the 8th foot, and the rest are arranged in order. When inserting, you need to pay attention to slowly and forcefully insert the 8 cables along the 8 wire grooves in the IU-45 head at the same time, and insert them to the top of the wire groove. Note: When cutting, it should be inserted horizontally, otherwise the cable length will affect the normal contact between the cable and the crystal head. If you have stripped off the protective layer too much before, you can cut the too long thin wire here, leaving the part of the outer protective layer about 15mm, which is just enough to insert the thin wires into their respective wire slots. If this section is left too long, it will increase crosstalk because the cables are no longer twisted. Secondly, because the crystal head cannot press the sheath, the cable may fall out of the crystal head, resulting in poor contact or even interruption of the line. Before the final step of crimping, you can check from the top of the crystal head to see if each set of cables is tightly pressed against the end of the crystal head. 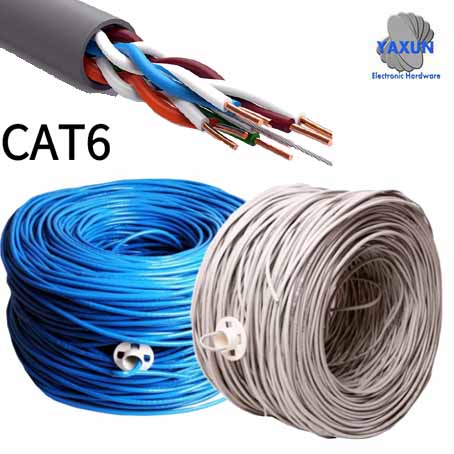 For twisted-pair cables, users are most concerned about several indicators that characterize its performance. These indicators include attenuation, near-end crosstalk, impedance characteristics, distributed capacitance, DC resistance, etc.
1. Attenuation
Attenuation is a measure of signal loss along the link. Attenuation is related to the length of the cable. As the length increases, the signal attenuation also increases. Attenuation uses "db" as the unit, which represents the ratio of the signal strength from the source transmitting end to the receiving end. Since attenuation varies with frequency, the attenuation at all frequencies within the application range should be measured.

2. Near-end crosstalk
Crosstalk is divided into near-end crosstalk and far-end crosstalk (FEXT). The tester mainly measures NEXT. Because of the line loss, the magnitude of FEXT has less influence. Near-end crosstalk (NEXT) loss is the measurement of signal coupling from one pair of wires to another in an unshielded twisted pair link. For unshielded twisted pair links, NEXT is a key performance index, and it is also the most difficult index to accurately measure. As the signal frequency increases, its measurement difficulty will increase. NEXT does not mean the crosstalk value generated at the near end point, it just means the crosstalk value measured at the near end point. This value will vary with the length of the cable, the longer the cable, the smaller its value becomes. At the same time, the signal at the transmitting end will be attenuated, and the crosstalk to other wire pairs will be relatively small. Experiments have proved that only the NEXT measured within 40 meters is more real. If the other end is an information socket farther than 40 meters, then it will produce a certain degree of crosstalk, but the tester may not be able to measure this crosstalk value. Therefore, it is best to perform NEXT measurements at both endpoints. Most testers are equipped with corresponding equipment so that the NEXT value at both ends can be measured at one end of the link. Refer to the following table for the results of the NEXT test:


The above two indicators are the main content of the TSB67 test. However, some types of testers can also provide indicators such as DC resistance, characteristic impedance, and attenuation crosstalk ratio.

3. DC resistance
The DC loop resistance consumes part of the signal and converts it into heat. It refers to the sum of the resistance of a pair of wires. The DC resistance of the 11801 twisted pair must not be greater than 19.2 ohms. The difference between each pair should not be too large (less than 0.1 ohm), otherwise it indicates poor contact, and the connection point must be checked.

5. Attenuation crosstalk ratio (ACR)
In some frequency ranges, the proportional relationship between crosstalk and attenuation is another important parameter that reflects cable performance. ACR is sometimes also expressed in terms of signal-to-noise ratio (SNR: Signal-Noice ratio), which is calculated from the difference between the worst attenuation and the NEXT value. A larger value of ACR indicates stronger anti-interference ability. General system requirements are at least greater than 10 decibels.

6. Cable characteristics
The quality of the communication channel is described by its cable characteristics. SNR is a measure of the strength of the data signal taking into account the interference signal. If the SNR is too low, it will cause the receiver to be unable to distinguish between the data signal and the noise signal when the data signal is received, which will eventually cause data errors. Therefore, in order to limit the data error within a certain range, a minimum acceptable SNR must be defined.
Share:
PREV：China Manufacturer of Shielded Cables
NEXT：Copper, Aluminum, Steel Stranded Wire